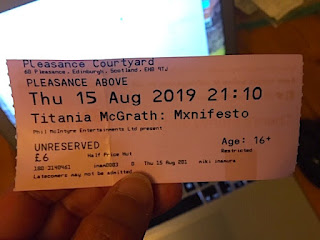 I decided to write what I thought about this particular show in English more than just a memo because I don't think any thoughts have been expressed by a non-EU, non-British live comedy geek for nearly 3 decades...yet and I want to be the first one.

Two kinds of Jokes are embedded in two layers in this show. 1) dead-pan jokes that everyone can easily get and 2) satirical ones that target certain groups of people or concepts. (We can see the same formula in Jonathan Pie, I mean, the recent one available on BBC iPlayer.) The former aside, the latter is what is to be focused on here.

Titania is a caricature, made of a certain type of liberal people, the media and things that don't make sense or are problematic. Her way of thinking, attitude and behaviour are meant to ridicule such. However, whom or what the show is targeting did not look consistent... at least to people like me, a graduate from Politics at the University of Warwick in the (Lee and Herring and Club Zarathustra) 90s, busy of joining protests, National-Expressing to indie gigs wherever possible.

Like, she wants to ban free speech (haha), she is against Brexit, a staunch feminist with a pro-diversity attitude. Jokes are not on the complexity of such issues, but subtly yet often on the people who improved the situation or the improved situation. It looks to me the show is a random attack. We are not sure where we are placed to read those jokes. For example, are we to laugh at or laugh with this character?

Having said this, it is fascinating as these problematic jokes could be seen as a reflection of the chaos in the current socio-political thoughts. The creator might have thought this all through and intentionally made the show like a random attack (but I personally think it is a by-product but that's just my guess.)

And, yes, obviously, there are lots of other people who are not like me, in fact, the majority of the people at the venue was not like me. Heard a lot of laughter in the audience, including a lovely Scottish couple sitting next to me. They really enjoyed the show. The actor who played Titania was totally right in saying 'This show is not for everybody', which is translated into 'Only "we" can get it'. This explains the reason for the mixed reviews. And I am fine with it.